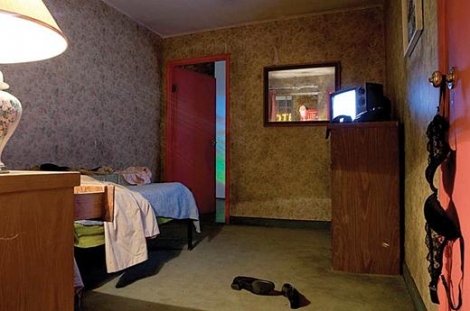 Setting and content of artist Tracey Snelling’s Woman on the Run exhibit are a study in contrasts.
On a recent Saturday, the sun played dazzlingly across the sylvan refuge of the Southeastern Center for Contemporary Art, or SECCA, formerly the English Hunt-style mansion of hosiery magnate James G. Hanes.

Hanes’ bequest to the art world reflects the industrial aristocracy, gracious living and assured social status that made his one of the three families, along with the Reynolds and the Grays, that put the city on the map.

The post-World War II milieu of Snelling’s imagination is an altogether more insecure place fraught with betrayal, seemingly on the verge of violent explosion and animated by desperate social striving. And it’s a parched and gritty landscape seething with instability, not the patrician East of strictly defined class relationships that Hanes knew.

The protagonist of Woman on the Run is obviously female, but a quick reference to heroine Veronica Hayden’s husband is in order. Described in an essay by Frist Center for the Visual Arts Associate Curator Trinita Kennedy as a “dark and shady businessman” and in a static-y, blackand-white newscast as a “man about town,” one imagines the fictitious Victor Hayden as a man from a hard and unforgiving background willing to cut corners to attain money, status and pleasure. He can be contrasted with the real-life James G. Hanes, a man who during the same historical period energetically promoted involuntary sterilization for the so-called “feeble minded” with a self-assurance that can be held only by those with unparalleled financial and political power.

The multimedia installation that is Woman on the Run thrusts visitors into a fragmented narrative based on the premise that its heroine is wanted by the US Marshals Service for questioning in the disappearance of her husband. Veronica Hayden somewhat resembles the character played by Susan Sarandon inThelma & Louise with her casually thrown scarf and oversized sunglasses, but Kennedy describes her as an homage to noir pinup queen Veronica Lake. She’s a pastiche of any number of alluring Hollywood femme fatales who chafe at the moral constraints of society, flirt with danger and swerve between the roles of victim and perpetrator. Beyond the setup, the installation leaves all the questions it raises unresolved and gives no clue about Veronica Hayden’s eventual fate. Is she guilty or innocent? Is her husband really dead or has he staged his own disappearance? Is he a threat to her? Will she get caught? Will she pay for her supposed transgressions?

In a fitting if completely unintentional parallel, my wife and I walked a labyrinth at Holy Trinity Episcopal Church in Greensboro as part of our Lenten reflection before visiting SECCA. Walking the circular configuration at Holy Trinity gave us both a sense of calm. As a traditional labyrinth, there were no forks or dead-ends, but the pathway wound in and out before finally reaching the center.

Woman on the Run is a different kind of labyrinth. A hall of mirrors assembled from paintings, video, signage and set designs, Snelling’s installation is disorienting rather than centering. The story is told in video screens set inside windows in paintings that show the heroine hurriedly packing and drinking booze. In other scenes, she drinks in a seedy bar and dances in an upper room with a mysterious man. A musty scent hangs in a forlorn hotel room with molding wallpaper complete with a disheveled bed, cast-off blond wig, brassiere dangling from a doorknob and stilettos tossed carelessly across the floor. A jarring soundtrack of lonesome steel guitar and train whistles plays up the desolate feeling to histrionic effect.

Visitors won’t find any definite answers in this funhouse, but if they pay close attention they might run across some stray clues about the nature of power, personal quest, female identity, desire, freedom and acceptance.

Woman on the Run remains on exhibit at SECCA, located at 750 Marguerite Drive in Winston-Salem, through May 27.
FacebookTwitterDeliciousLinkedinReddit
Posted by Woman on the Run at 5:04 PM No comments:

Photos from SECCA's Woman on the Run installation 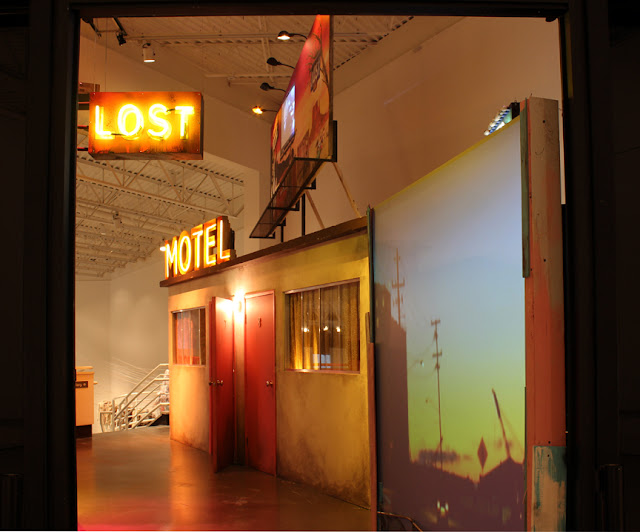 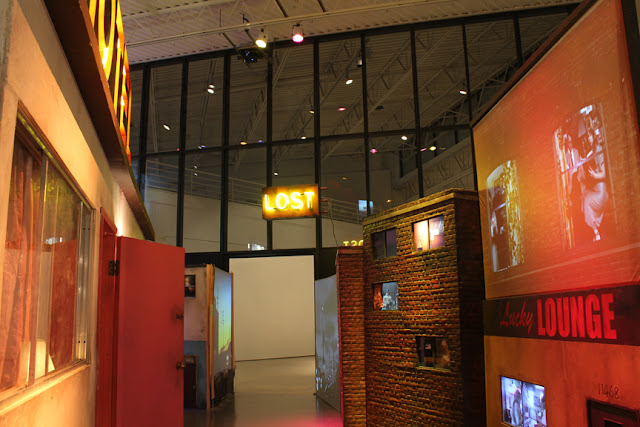 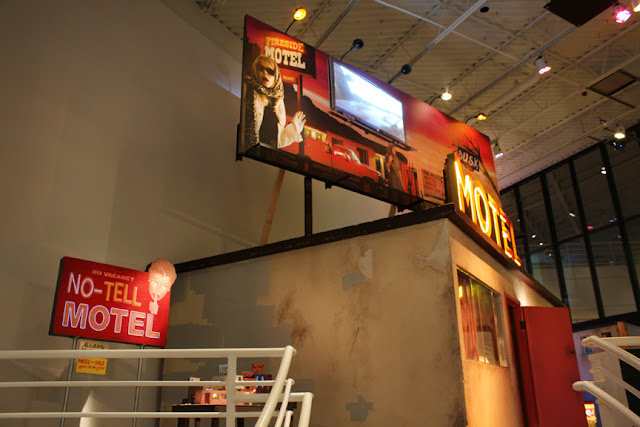 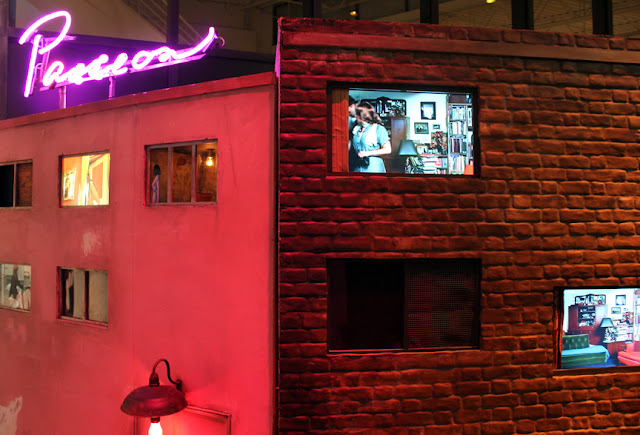 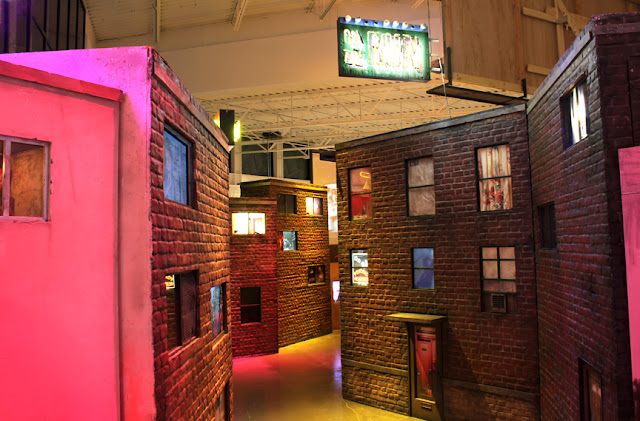 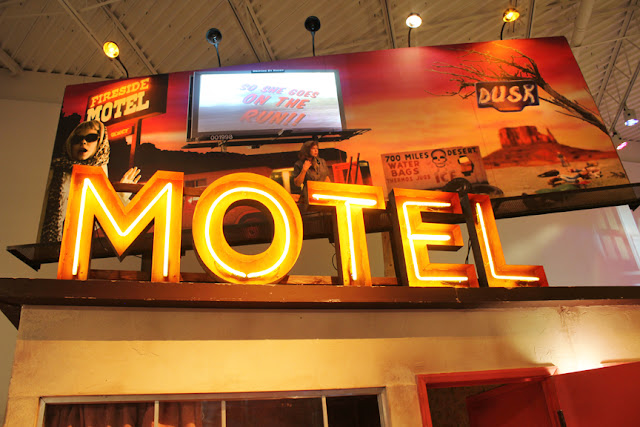 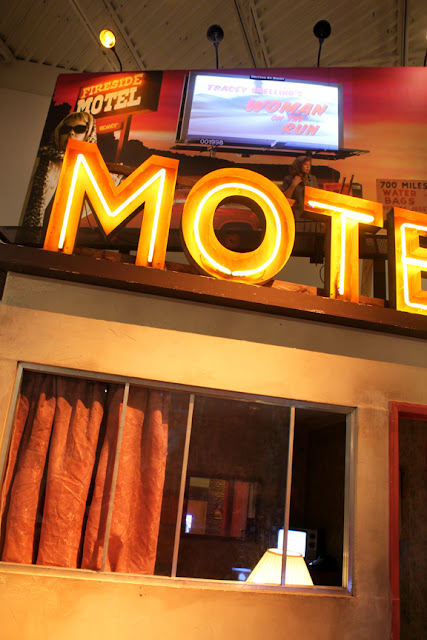 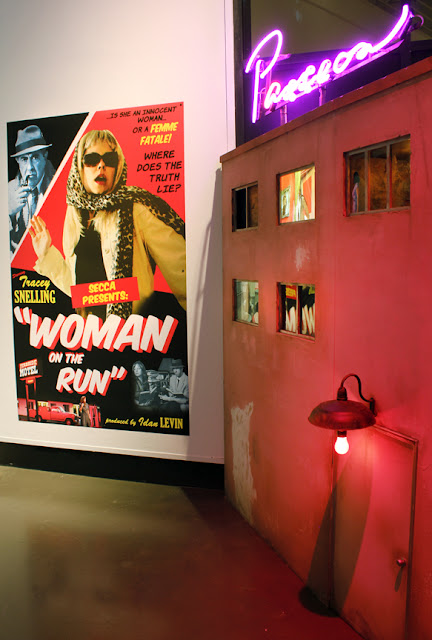 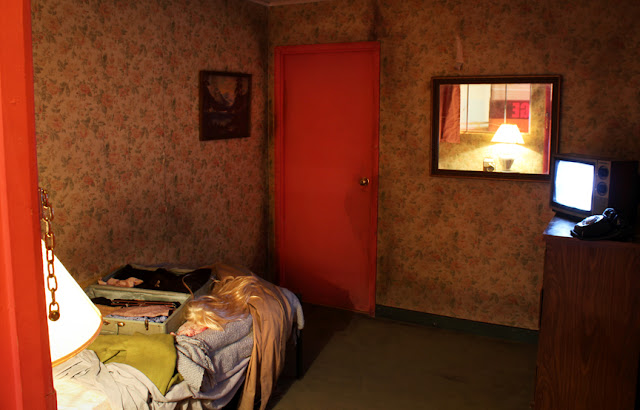 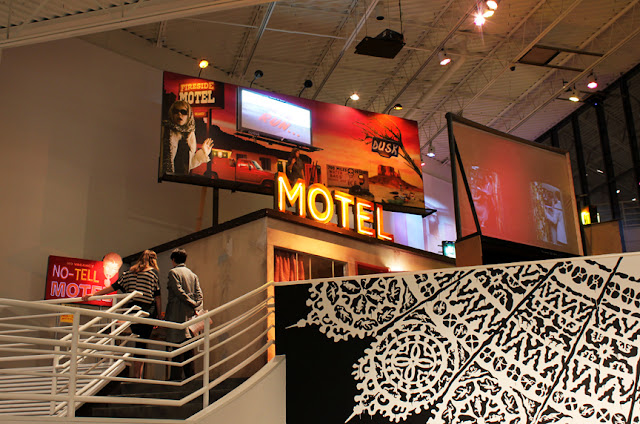 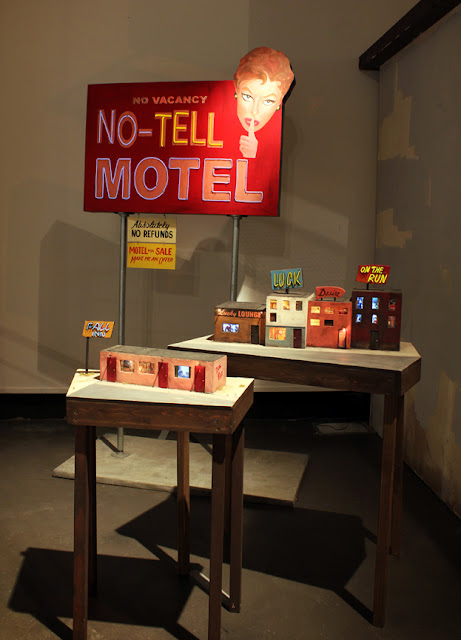 Posted by Woman on the Run at 7:50 PM No comments: 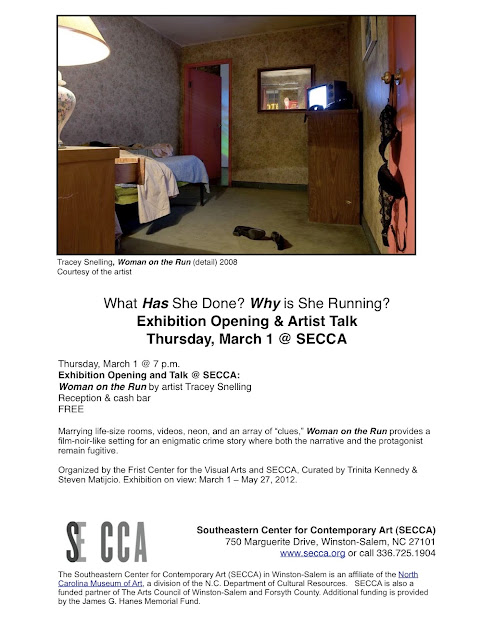 WINSTON-SALEM, NC (Feb. 21, 2012) – It’s a dark and stormy night, with neon motel signs providing the only glow. Out of the shadows of dingy back alleys and tired brick storefronts, there is a woman trying to slip away. The only thing she leaves behind is the hollow sound of spiked heels clattering on the sidewalk. What has she done? Where is she running?

At 7 p.m. Friday, March 1, SECCA will host an introductory artist talk by Snelling in the McChesney Dunn Auditorium followed by an opening reception. During the presentation Snelling will discuss the motivations and manufacture behind her exhibition, as well as the larger context of her cinematically influenced practice. The event is free and open to the public. Woman on the Run will be on view until May 27, 2012.

SECCA Executive Director Mark Leach says, “Snelling’s work is continually evolving as it changes in the eyes of each person who walks through her sculptural maze. While she leaves a constellation of clues as to who the woman is, and what she’s done, Snelling presents no answers. In a sense, the mystery of the story becomes the core of an exhibition that never reaches a full conclusion.”

In Woman on the Run, Snelling evokes a world of black & white Hollywood crime thrillers where the lines between good and evil becomes tantalizingly blurred. Within the exhibition space Snelling creates a world unto itself, where audiences will walk through pieces of a city and an abandoned motel room. The woman is the protagonist, and the question remains what did she do and did she really do it?

Snelling builds sets of all scales, from toy model to lifesize, that map the seedy, but unmasked sides of cities across America. This exhibition brings cinema to life, and invites the viewer inside to navigate a world of femme fatales, gritty theatre, and the questions of female representation in film. The viewer lives the mystery and follows a trail of clues through film, video, sculpture and environment.

SECCA Curator of Contemporary Art Steven Matijcio says, “In anticipation of the River Run film festival and the film lovers it brings out, Snelling’s Woman on the Run allows people to experience cinema in an expanded field. Without a beginning or end, the audience is thrust into the middle of a retro crime drama whose meaning accumulates with every additional step through the set. One can only really know this experience by becoming part of its world.”

The exhibition was collaboratively produced by The Frist Center for the Visual Arts in Nashville, TN and SECCA. Woman on the Run recently showed at the 21C Museum in Louisville Kentucky, and will be presented at the newly re-named Virginia MoCA this Fall. For additional details, please visit www.secca.org.

About SECCA
The Southeastern Center for Contemporary Art (SECCA) in Winston-Salem is an affiliate of the North Carolina Museum of Art, a division of the N.C. Department of Cultural Resources.   SECCA is also a funded partner of The Arts Council of Winston-Salem and Forsyth County. Additional funding is provided by the James G. Hanes Memorial Fund.